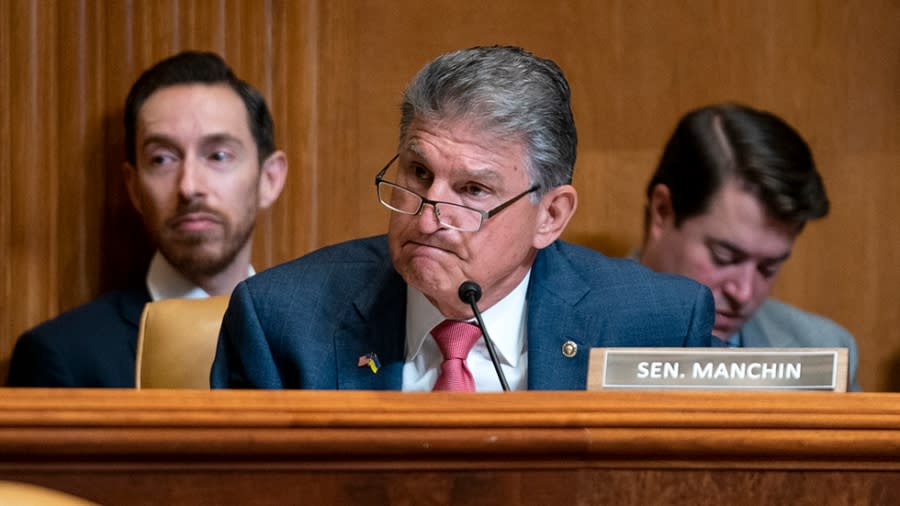 Sen. Joe Manchin’s (D-W.Va.) latest moves are fueling new doubts that he’ll agree to any sort of legislative package on President Biden’s agenda, deepening Democratic worries about what they’ll be able to deliver to voters by Election Day.

Several Democratic senators say they are growing dispirited about the prospect of Manchin ever giving the greenlight to moving a budget reconciliation package, which would prevent Republicans from blocking Biden’s legislative agenda with a Senate filibuster.

Asked about how much confidence there is in Manchin coming on board with a reconciliation bill, one Democratic senator who requested anonymity to comment on the shrinking chances said there’s “less every day.”

“This is the make-or-break period,” the lawmaker said, referring to the current five-week work period which runs up until Memorial Day weekend.

“I think we need to have a come-to-Jesus moment,” the source said. “The back-room approach has not worked.”

Democratic senators received little information about where talks on the budget reconciliation package stood during their Tuesday lunch meeting, the first time the Democratic caucus met as a whole since coming back from the two-week April recess.

Manchin missed much of that meeting.

Two days later, reporters asked him and GOP senators about the claim in a new book that Manchin said he would be willing to switch to the Republican Party if Sen. John Thune (S.D.) were the Senate GOP leader instead of Sen. Mitch McConnell (R-Ky.).

“I get that question every day. These are all my friends on both sides of the aisle,” Manchin said when asked about the report that he said he could switch parties if Thune were the Senate Republican leader.

“The bottom line is I am a West Virginia Democrat. I’m not a Washington Democrat. And I’m not a very liberal person. I’m more of a centrist. I’m fiscally responsible and socially compassionate,” he added.

The banter between Manchin and his Republican colleagues is reinforcing doubts that he will not sign on at any point this year to a partisan reconciliation package to enact major elements of Biden’s domestic agenda with 50 Democratic votes and no GOP votes.

Democrats also have taken note that Manchin’s opposition to various Democratic initiatives appears to be playing well back home.

In addition to opposing the advancement of Biden’s Build Back Better agenda, Manchin opposed Biden’s nomination of Neera Tanden to head the Office of Management and Budget, and Sarah Bloom Raskin to serve as the Federal Reserve’s vice chair of supervision.

Manchin’s job approval rating in West Virginia has jumped by 17 points compared to a year ago, according to a Morning Consult poll published Monday. Fifty-seven percent of West Virginians now approve of Manchin’s job performance compared to only 40 percent after the first three months of 2021.

The surge in popularity in West Virginia, a state Donald Trump carried with 69 percent of the vote in 2020, makes it look less likely he’s going to reverse course and support a budget reconciliation package that passes without a single GOP vote, his Democratic colleagues fear.

Adding to Democrats’ concerns, Manchin has convened a bipartisan group of senators in an attempt to pass a package of energy proposals that would also address climate change with 60 votes under regular order.

Sen. Mark Kelly (D-Ariz.), who attended the first bipartisan meeting convened by Manchin on energy and climate proposals, told The Hill there’s “a lot of overlap” with what’s been discussed for inclusion in the reconciliation package.

Schatz declined to comment on the meeting but the mere fact that he was invited shows that Manchin hopes to tackle some of his colleagues’ climate priorities under regular order instead of through budget reconciliation.

Asked if the bipartisan energy package he’s putting together is intended to replace the strategy of moving an energy and climate package in a budget reconciliation bill, Manchin told The Hill: “We’re trying to get input from everybody. I want input.”

Pressed on whether climate and energy legislation should move outside the budget reconciliation process, Manchin signaled he’d like to pursue the same bipartisan approach he used last year in helping to negotiate a $1 trillion infrastructure bill that passed the Senate with 69 votes.

“Anything we can do along the lines we did on the infrastructure bill would be great if we could,” he said. “We’re determined to do something on a path to reliable energy so we have reliable energy for our country.”

He explained that he wants to make sure that what he sees as more reliable fossil fuels are not shut off too quickly while the nation makes the transition to cleaner renewable fuels.

“I want to work in a bipartisan way,” he said.

Sen. Sheldon Whitehouse (D-R.I.), a leading advocate for reducing carbon emissions, however, predicts that any package negotiated with Republicans will fall far short of the goals of Biden’s Build Back Better agenda.

“It seems highly improbable that anything that involved Republicans will also be serious on climate, at this stage,” he said.

Manchin says an energy package needs to support the production of fossil fuels as well as renewable energies, a tack that puts him in conflict with Whitehouse and other Democrats who view the reconciliation package as their best opportunity in perhaps the next ten years to reduce global-warming emissions in a big way.

“We need a two-path system. You have to have the climate and you have to have the reliability of the fossil,” he told reporters Thursday, shooting down talk of trying to quickly shift the nation away from relying on oil, natural gas and coal. “You can’t eliminate one before the other.

Manchin has scheduled two more meetings next week with the bipartisan group to hash out a compromise energy bill, according to a GOP senator invited to attend.

For the latest news, weather, sports, and streaming video, head to The Hill.