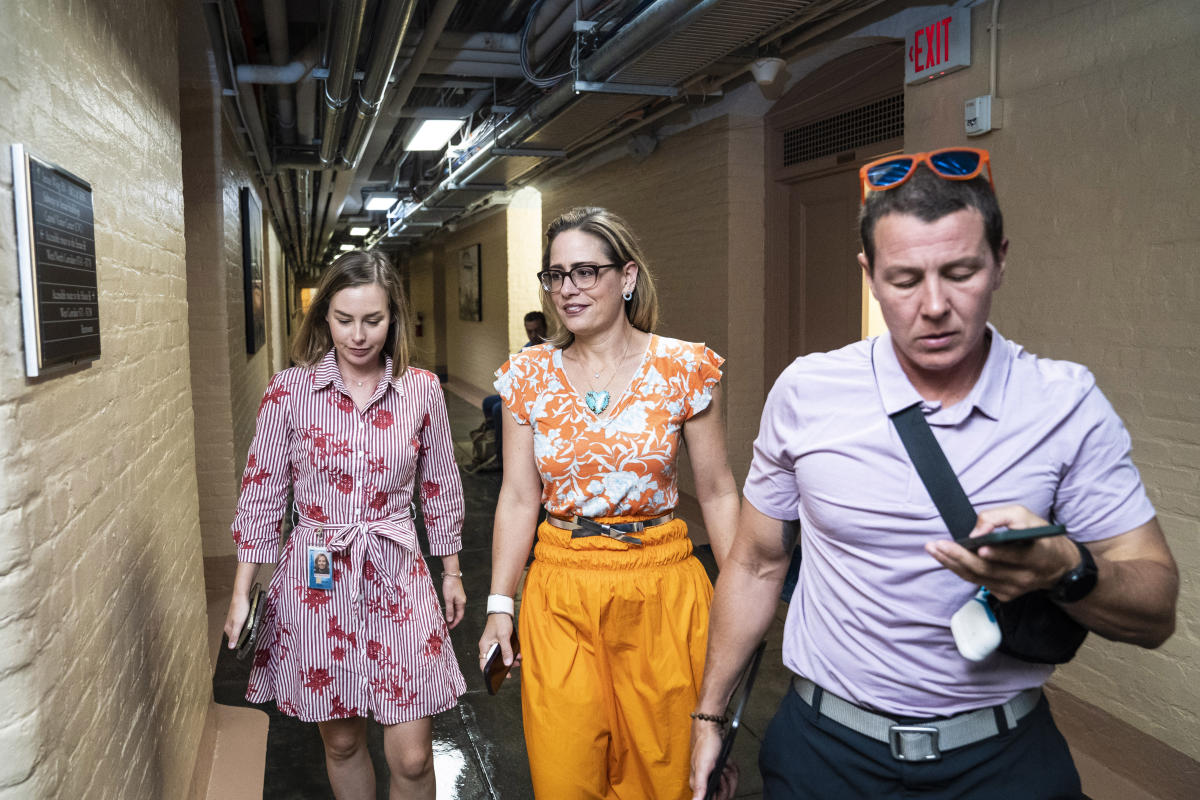 ONE-TIME USE ONLY. Photo(s) may be used only in context with the related story.

WASHINGTON – As Democrats hurry to finalize $739 billion climate, health-care and tax legislation that was revived last week to the surprise of most Washington insiders, business lobbyists and issue advocates are working to support, tweak or derail the bill entirely.

The measure, dubbed the Inflation Reduction Act, would provide the largest investment in U.S. history for clean energy and other efforts to combat climate change. It also aims to lower health-care costs by allowing Medicare to negotiate prescription drug prices, and it would levy a new minimum corporate tax and bolster the Internal Revenue Service budget to go after tax cheats.

The sudden revival of the legislation last week launched a flurry of efforts by groups for and against it, who are using television and newspaper ads and personal outreach to try to sway Democrats to their side before the Senate votes.

Much of the fiercest lobbying has focused on the bill’s health-care provisions.

Research by Patients for Affordable Drugs Now, which advocates for lower prices, found that the main pharmaceutical lobby PhRMA and its allies spent at least $18.6 million on television and digital ads since July 1, including $1 million in spending on new television ads just since the Democrats’ deal was announced on July 27. That $1 million figure does not include ads that were already running when the deal was announced.

“Clearly the pace of spending picked up in the last month or so,” said David Mitchell, president of Patients for Affordable Drugs Now. “They have spent a boatload of money to try and stop this reform.”

Some of the pharmaceutical lobby ads tracked by Mitchell’s group include one running in July and August that argues Medicare “price-setting” – the government negotiating with manufacturers over drug prices, as the bill allows – would interfere with seniors’ ability to get the medication they need. That ad ran in Washington, Georgia, Nevada, West Virginia and other markets, according to the research.

The ad was put out by the Partnership to Fight Chronic Disease, a nonprofit group that has run other ads opposing Medicare negotiation. A spokeswoman, Jennifer Burke, said current proposals “will ultimately create an even greater burden for our already ailing health-care system.”

A PhRMA spokeswoman declined an interview request. The lobbying group held a briefing last week where executives argued the drug-pricing measures would reduce the supply of lifesaving medicines.

On the other side of that policy, an array of groups that see it as a way to lower health-care costs for Americans are supporting the measure, including AARP, which launched a new ad buy on Thursday in Arizona, Nevada and Georgia set to run through Monday and totaling around $700,000. The group also has a $3 million ad buy running in the Washington D.C. area and on national cable, urging senators to stand up to Big Pharma.

AARP members across the country are contacting their legislators to urge them to support the package, and the group is scheduling meetings with senators and their staff to make the case, said Bill Sweeney, the group’s senior vice president of government affairs.

“This is common sense,” he said in an interview on Wednesday. “Our AARP members are fired up about this, and they’re ready.”

The bill also provides hundreds of billions of dollars in investments meant to fight climate change and lower emissions of planet-warming greenhouse gases, and it outlines requirements for tax credits worth up to $7,500 for the purchase of electric vehicles.

Starting at the end of 2023, the EV provision allows the credits to be used only for vehicles with batteries manufactured or assembled outside of countries of concern such as China. At the end of 2024, a similar requirement will extend to the critical minerals contained in the batteries.

The Zero Emission Transportation Association (ZETA), which issued a statement last week urging passage of the bill, is asking senators to consider extending the deadlines by a year or more to make it easier for companies to comply, said Joe Britton, ZETA’s executive director.

In a Tuesday news conference, Sen. Joe Manchin, D-W.Va., a crucial player in the Democrats’ deal, signaled that he was not open to flexibility on the provision.

“Tell them to get aggressive and make sure we’re extracting in North America, we’re processing in North America, and we quit relying on China,” Manchin said. “I’ve been very, very adamant that I don’t believe we should be building this transportation mode on the backs of foreign supply chains, and I’m not going to do it.”

The bill also places price limits of between $55,000 and $80,000 on the electric vehicles for which the tax credit can be used. Rivian, a manufacturer of electric pickup trucks and SUVs, is asking legislators for a tweak that would effectively give it and some other manufacturers a two-year transition period before those limits would apply, said James Chen, the company’s vice president for public policy.

While many of Rivian’s vehicles start at prices below the threshold, they are “right on the cusp” and could easily go over when options are added, Chen said. The company has contacted Senate leadership as well as senators in states where it has operations or has planned a future factory, including Michigan, Georgia and California, he said.

Meanwhile, some business and GOP groups are focused on derailing key tax measures in the bill, targeting moderate Democrat Sen. Kyrsten Sinema of Arizona with their outreach. Sinema announced only Thursday night that she would vote for the bill, after Democrats agreed to some changes in the tax provisions.

The U.S. Chamber of Commerce, for instance, took out a full-page ad in Arizona newspapers blasting the initial tax provisions. In recent days, Sinema has also heard an earful from Arizona businesses, many of which have called on her to oppose the legislation’s minimum corporate tax.

The Arizona Chamber of Commerce and Industry, for example, delivered its message directly during a Zoom call Tuesday afternoon. Business leaders in manufacturing, pharmaceuticals and energy – flanked digitally by their top lobbyists – implored Sinema to reject policies including a proposed minimum 15% tax on corporations. That provision as initially written would raise $315 billion, a good chunk of the bill’s total revenue.

Danny Seiden, the president of the local chamber, said Sinema “wanted to know from us [if] this bill was written in a way that had negative impacts on business,” adding: “She wanted as much information as she can get.”

Seiden said the companies essentially told Sinema that the policy would crimp capital investment, constraining domestic supply chains. But he said Sinema did not “give us any indication” of her views during the Zoom.

Meanwhile, the America First Policy Institute, a group founded by former economic aides to President Donald Trump, brought together 75 conservative organizations for a conference call on Wednesday night to strategize about how to stop the bill. The Committee to Unleash Prosperity, which is focused on Arizona, is running advertisements questioning spending items such as retrofitting Postal Service trucks, said Stephen Moore, a former Trump adviser who sits on the group’s board.

Moore said GOP donors are “fired up” about the bill and determined in particular to oppose increasing the IRS budget.

“We’re scrambling to put together to put a campaign that’s effective,” Moore said. “We’re trying to figure out what’s the major vulnerability here, what’s the least popular part in this bill. . . . This line that now is not a good time to raise taxes generally resonates with people. The truth is we don’t have a silver bullet and are looking for one.”

But one K Street lobbyist, speaking on the condition of anonymity to discuss sensitive talks, said the opposition among industry groups was muted in part because they had just last year been bracing for multitrillion-dollar tax hikes – rather than the diminished measures that have emerged. Small businesses successfully stripped higher taxes on pass-through entities, while bigger firms succeeded in keeping the corporate rate at 21%.

Democrats had pushed to raise the corporate tax rate to 28% – which would have hit far more firms than their ultimate plan to impose a minimum tax that will only fall on corporations now paying below 15%.

“If you told people a year ago they’d have to settle for a minimum tax, that sucks, but it’s definitely a mitigated outcome,” the lobbyist said. “I think a year ago, people would have taken that in a heartbeat.”

The head of one conservative organization, citing conversations with large donors, agreed.

“My impression anecdotally is there is not going to be a big push against this from the business community, and there are a few pieces that are arguably good for business,” the person said, speaking on the condition of anonymity to discuss private talks.

Even if it passes, provisions of the bill may not be safe for long.

Doug Holtz-Eakin, former director of the Congressional Budget Office and a White House economist under President George W. Bush, said Republicans are prepared to attack “everything” in the bill if it passes. If the GOP retakes Congress in this fall’s midterm elections, they may make a push to kill the 95% excise tax on the pharmaceutical industry, believing that will force the rest of Democrats’ attempt to overhaul drug prices to collapse.

The Washington Post’s Tony Romm contributed to this report.

Police accused her of making up her rape, then destroyed the evidence

How Joe Manchin’s change of heart could revive the U.S. solar industry