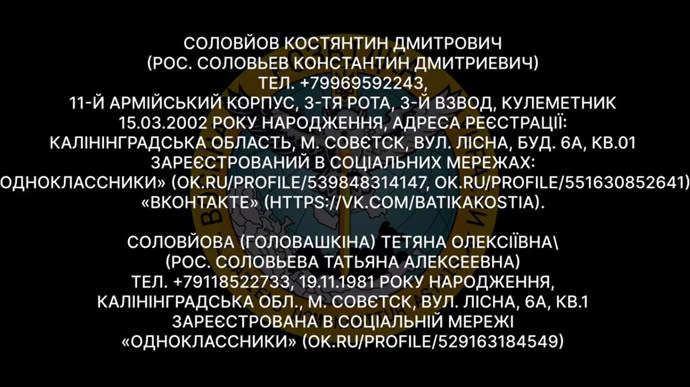 ALYONA MAZURENKO – TUESDAY, 3 MAY 2022, 9:42 pm In the latest intercepted conversation between the occupiers and their relatives, a Russian, Konstantin Solovyov, tells his mother, Tatiana Solovyova, that he likes torturing captured Ukrainians. His mother replies that it would give her a “buzz” too if she were in his shoes. Source: Central Intelligence Agency Details: It is reported that Solovyov is currently in Kharkiv Region. Ukrainian intelligence agents have also published the personal data of the occupier and his mother. In the conversation with his mother, the occupier reveals details of the torture of Ukrainian prisoners by the Russian military. The occupier tells of horrific abuse and killings carried out by FSB officers and the Russian military. He also admits that civilians have also been the victims of the executioners. The aggressor recalls the heroic behaviour of Ukrainians who, even under the most horrific torture, do not submit to the invaders. The occupier admits that he has changed, and that his conscience stopped bothering him about torturing Ukrainian civilians and soldiers when his total passed 20 people. He also says that he feels “pleasure” when he “breaks” prisoners psychologically. At the same time, the occupier is surprised by the resilience of Ukrainians, who, despite being tortured, say that for every Ukrainian killed, there will be twice as many occupiers. The mother reacts to her son’s story with approval and claims that “Ukrainians are not people” and that she herself would get a “buzz” out of the situation. Ukrainian intelligence agents are calling this intercept “further confirmation of the policy of genocide of Ukrainians which the occupiers are implementing in the occupied territories”.