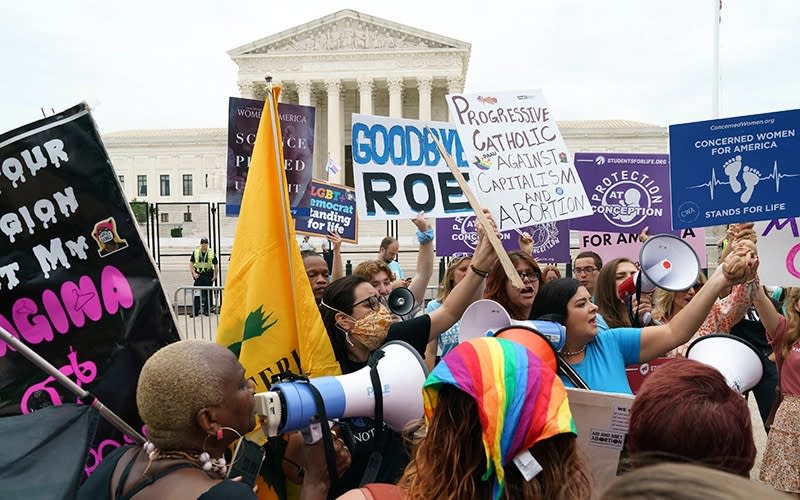 Global inflation has hit the zoo. Facing rising costs, a Japanese zoo is giving its penguins and otters cheaper fish than usual. Some of the animals are less than impressed and refusing to eat the cheap stuff.

In health news, with Roe overturned, Republican House members are now thinking of restricting abortions across the country, though any legislation faces several obstacles.

Welcome to Overnight Health Care, where we’re following the latest moves on policy and news affecting your health. For The Hill, we’re Peter Sullivan, Nathaniel Weixel and Joseph Choi. Someone forward you this newsletter? Subscribe here.

House Republicans are weighing what kind of national-level abortion ban legislation to pursue if they win the House majority next year, with a 15-week ban or further on the table.

But even as they cheer the Supreme Court overturning the landmark abortion rights decision in Roe v. Wade, GOP congressional leaders have made few promises on specific measures they would pursue, and some Republicans have advocated leaving abortion restrictions to the states.

House Republicans previously passed the Pain-Capable Unborn Child Protection Act, which would ban abortion after 20 weeks, in 2015 and in 2017.

Rep. Chris Smith (R-N.J.), the sponsor of the bill in this Congress, told CNN that he was considering changing the limit to a 15-week ban. Asked about a 15-week abortion ban, House Minority Leader Kevin McCarthy (R-Calif.) told CNN that he would support that.

Roadblocks remain: It is unlikely that any abortion ban passed in a GOP-controlled House in the next Congress would become law. Election analysts believe it is unlikely that Republicans would win a filibuster-proof majority in the Senate, and President Biden would almost certainly veto it if such a bill did pass the upper chamber.

But passing an abortion ban in the House would send a message about where the GOP stands on abortion in a post-Roe landscape and could signal the type of restrictions that Republicans would implement if they do win total control of government.

WHO to reassess monkeypox as cases climb

World Health Organization (WHO) Director-General Tedros Adhanom Ghebreyesus on Thursday said he plans on reconvening a meeting of his organization’s Emergency Committee to assess the current state of the monkeypox outbreak in Western countries.

In remarks given Thursday, Tedros told WHO member states that he was still concerned about the spread and scale of the monkeypox virus in nonendemic countries.

According to the WHO chief, more than 7,000 cases have been confirmed in 60 countries so far, with Europe currently the epicenter of the outbreak.

“My teams are following the data closely. I plan to reconvene the Emergency Committee so they are updated on the current epidemiology and evolution of the outbreak, and implementation of counter measures,” said Tedros.

He stated that he plans to convene the meeting during the week of July 18 or sooner if needed.

Last month, the WHO’s Emergency Committee said the monkeypox outbreak did not warrant declaring a global health emergency despite the rapid rise in cases.

The Women’s March says it is planning to hold a sit-in at the White House on Saturday to push the Biden administration to protect abortion access.

The civil rights organization announced plans for what it refers to as a “mass action” that will include a rally and march to the White House followed by a sit-in.

“Women’s March members and protestors will risk arrest to get our message over to President Biden: protect abortion,” the Women’s March said in a statement.

The sit-in is scheduled to begin at noon.

Immediately after the Supreme Court ruled to overturn Roe v. Wade, the Women’s March called for a “summer of rage” in response to the limits and bans on abortions that were quickly introduced by states across the country.

The last abortion clinic in Mississippi officially shut down Wednesday, a day before a trigger ban against almost all abortion procedures is poised to take effect in the state, following the Supreme Court’s decision last month to overturn Roe v. Wade.

Shannon Brewer, who led the clinic involved in the controversial Dobbs v. Jackson Women’s Health Organization Supreme Court case, told The Washington Post in May about plans to relocate to New Mexico, where abortion procedures are still legal.

In late June, New Mexico Gov. Michelle Lujan Grisham signed an executive order protecting medical providers in the state from “discipline due to an out-of-state resident receiving abortion services in New Mexico,” according to a release from the governor’s office.

Grisham’s order also established that “New Mexico will not entertain extradition attempts from other states relating to receiving or performing reproductive services.”

Abortions are restricted in Texas, Oklahoma, Arizona and Utah, which border New Mexico. Texas made headlines last fall with a law that banned abortion after six weeks of pregnancy. This spring, Oklahoma banned abortions from the point of fertilization.

Pharmaceutical giant AbbVie generates almost all of its sales in the U.S. but has allegedly exploited former President Trump’s tax law to shield much of its sales from taxes, according to a report released Thursday by Democrats on the Senate Finance Committee.

The report details how loopholes in the 2017 tax law have allowed AbbVie, a large multinational corporation headquartered in the United States, to substantially shrink its tax burden and stash profits overseas to avoid paying U.S. taxes on prescription drug sales.

According to the report, AbbVie generated over $56 billion in worldwide sales in 2021, with over 77 percent made to American consumers, yet just 1 percent of AbbVie’s income was reported in the United States for tax purposes.

The company was allegedly able to accomplish this by taking advantage of Trump’s tax law, which changed how companies calculate their tax bills on profits generated internationally.

Our new YouTube channel posts rapid updates on the top story of the day, tracking key figures in politics and making sense of important policy decisions and how they impact your life.

That’s it for today, thanks for reading. Check out The Hill’s Health Care page for the latest news and coverage. See you tomorrow.

For the latest news, weather, sports, and streaming video, head to The Hill.